Two people in a conversation amount to four people talking. The four are what one person says, what he really wanted to say, what his listener heard, and what he thought he heard.
~WJ Bryan

Happy Poetry Friday and Happy National Poetry Month! I'm celebrating a new book: IMPERFECT II. It's another poetry anthology for middle schoolers. Last time, the poems were about mistakes; this time, the theme is poems about perspective. The themes fit together well.

I didn't have any plans to do a second book (or I would have called the first book IMPERFECT I) but this one grew from a seed of an idea the same way the first book did, something that nagged at me until I went ahead and took the plunge. It was a bit of a difficult process, not gonna lie, and I teared up when I saw my copy. (The first time I've done that!) 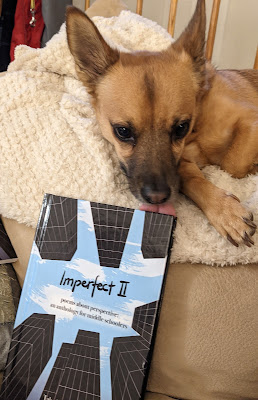 Preston gave it the lick test

Want to know who's in the book? Come visit the IMPERFECT II blog! The poets are all listed, plus we will feature poets' bios on an on-going basis. I will be posting there every day or nearly every day in April.

I made a Pinterest Board for IMPERFECT II which has quote pins, art perspective lessons, thoughts about thinking, etc.

Today's poem is about someone who realizes that their point-of-view may have limitations they aren't even aware of:

All But Blind
by Walter De La Mare

All but blind
In his chambered hole
Gropes for worms
The four-clawed Mole.

All but blind
In the evening sky
The hooded Bat
Twirls softly by.

All but blind
In the burning day
The Barn-Owl blunders
On her way.

And blind as are
These three to me,
So, blind to Some-one
I must be.

Leaving you with a song! This book is written, but what comes after...the rest is still unwritten!

My Juicy Little Universe has the Poetry Friday roundup today. Thanks, Heidi!

Congratulations, Tabs! Woot-woot! I am excited to get a copy of your beautiful new (im)perfect creation. Smidgey is loving that your poochy ambassador, Preston gave it a lick of approval! Cheering for you my friend! :)

Hooray, Congrats 🎈🎉🎊 and sending lots of 💗 for "Imperfect II" Tabatha, I’m looking forward to spending time with it, and very happy to be a part of it!! "All But Blind" seems a perfect poem for our imperfections and overlooked perspectives, your musical piece fits so well too! xox

Congratulations! Being a middle school teacher, I am always looking for new poems to share with them that they can relate to. Love the poem you shared, as we all need to adjust the way we look at things sometimes. (Love that song too - one of my favorites!)

I love that song! It goes perfectly with Imperfect II!

I just love the simplicity and the wisdom in Walter De La Mare's poem. So lovely. Thanks for sharing that. A must-keep. Congratulations on your book. It must have been thrilling to see the book finally appear!

Congratulations, Tabatha. It looks wonderful & with the blog, plus, I see you're doing so much more work. The poem seems like a great send-off!

Adore this song! And how about that Walter de la Mare! Spot on, so succinct. I'm glad you were able to release a few tears of happy and proud relief, Tabatha. This is exciting. I wonder if you know the brilliant picture book THEY ALL SAW A CAT? Wish I'd mentioned it months ago...https://en.wikipedia.org/wiki/They_All_Saw_a_Cat

Well, congratulations to you! This is very exciting and even better that it just happened and wasn't part of a grander plan. Happy NPM!

Tabatha, congratulations! You deserved every tear for all that work, and to see the beautiful outcome must have been a thrill. We are all proud of you!

Congratulations, Tabatha. Those tears are beautiful - and your cover is fabulous. I love that perspective. Hoping this second book is as well received as the first. xx

Congratulations, Tabatha! I'm honored to be included in Imperfect II! Love the Walter De La Mare poem and the song.

I always wondered who sang that song. It has a bit of an Alanis Morisette vibe, no? You should be proud of what a difference you're making in middle schoolers lives. The work was all worth it!

Congrats on Imperfect II! And thank you for sharing the music and the poetry! What a (belated)joy to drop in on your posts!