The Bells of St Genevieve

At first a faint tinkling passes from church to church...see how, all of a sudden, at the same moment, there rises from each steeple as it were a column of sound, a cloud of harmony...Say if you know anything in the world more rich, more joyful, more golden, more overwhelming than that tumult of bells, than that furnace of music, than those ten thousand voices of bronze singing all at once from flutes of stone three hundred feet high, than that city which has become an orchestra, than that symphony which roars like a storm.
~Victor Hugo

That quote from The Hunchback of Notre Dame makes me want to start reading it asap. Poetry, I'd say. I have a song today, but I also have one painting since it's Art Thursday: 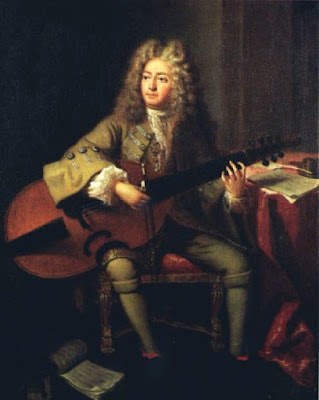 Marais is credited with being one of the earliest composers of program music. His work The Bladder-Stone Operation, for viola da gamba and harpsichord, includes composer's annotations such as "The patient is bound with silken cords" and "He screameth." The title has often been interpreted as "The Gall-Bladder Operation," but that surgery was not performed until the late 19th century. Urinary bladder surgery to remove stones was already a medical specialty in Paris in the 17th century.

He looks so at ease playing his instrument, the music itself is really lovely, and all the paintings that accompany the music are beautiful, serene, restful...NONE of which would I associate with kidney stones and operations (I'm a stone producer myself)! But once I got past the title of the piece, I really enjoyed it. :-)

That piece is about church bells, so no stones to be heard! I included the info about a piece I didn't share. To be honest, I'm not sure any modern orchestras have played it.