Missive from a Working Motorcycle, 1917

A woman who rides a motorcycle is in tune with the universe, a candidate for high adventure.
~Celestine Sibley

When I was thinking about what to write for Donna for the Summer Poem Swap, I knew I'd write something that rhymed, and I wanted to write about motorcycles since she is a dedicated rider. I don't know anything about motorcycles, though, so I looked into them and discovered that Doug Domokos (aka The Wheelie King) had a record for doing a wheelie for 145 miles. Which is mindblowing, but didn't turn itself into a poem (wouldn't that be a fun concrete poem?!).

I kept going and read about despatch riders, motorcyclists who volunteered in World War I to bring messages from the military units to headquarters (and vice versa). That caught my attention and the next thing I knew, I was talking about pigeons:

Missive from a Working Motorcycle, 1917
by Tabatha Yeatts
for Donna

My wheels in mud don't trouble me,
Nor driving dark so no one sees,
Nor endless work, nor blood and dirt–
I say with all due modesty,
My motto is semper gutsy.

Ferrying wounded I prefer,
Or bringing leaders vital word
Or munitions for special missions...
Instead I have this task absurd–
My side is loaded down with birds.

My poor seat is feather-adorned,
Coos wake me in the early morn,
The scat I wear– too much to bear–
Still the communiqués they carry
Make me a noble aviary. 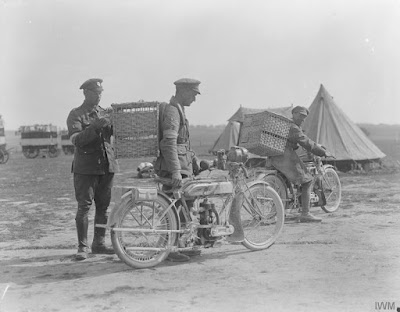 The Royal Engineers Signals Service on the Western Front, 1914-1918
photo by David McLellan


More pigeon photos from World War One, just because they were such amazing creatures: 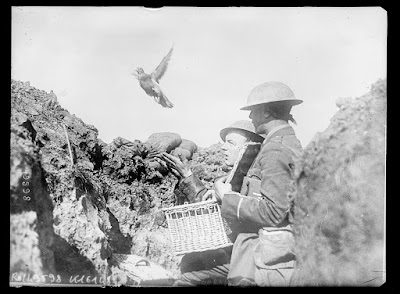 Pigeon at the front 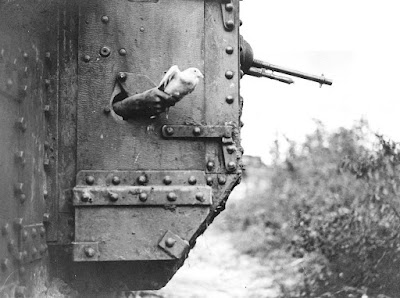 A message-carrying pigeon being released from a port-hole in the side of a British tank, near Albert, France.
photo by David McLellan 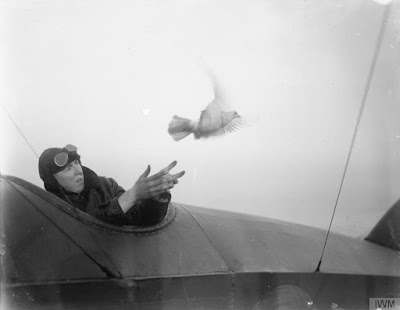 The Royal Navy on the Home Front, 1914-1918
Pilot releasing a homing pigeon from a British seaplane
photo by Royal Navy official photographer

The most famous homing pigeon from World War I was Cher Ami, who saved nearly two hundred lives despite being severely injured.

Carol's Corner has the Poetry Friday round-up. Thanks, Carol!

That would seem to be the obvious (and perfect!) combination for Donna. Well done, you. Love how you fossicked around and found so many facts to weave into your poem. (That is so you!) A lovely connection with LindaM's post today, too.

LOVE this! You are a master of creating just the right poem -- form and topic -- tor your recipients! And your word choice...stunning.

Wow, Tabatha. What a wealth of knowledge you have unearthed in creating this oh-so-perfect poem for Donna. I don't think I knew anything about motorcyclists carrying the pigeons during WWI. So cool! Then tor turn that information into not only a poem, but a rhyming poem, holy cow! And I love the photographs you've chosen.

Tabatha, who knew that motorcyclists were vital during wartime. Thanks for unearthing such information and being creative with inserting fact into your poetry. Donna must be so happy with your poetry swap. I may use the photos with teachers who are interested in world war units of study. I also wrote for Donna as you know but my focus was on our involvement with Spiritual Journey first Thursday.

Love that 'noble aviary', Tabatha. The Museum of Contemporary Art, where my daughter works, had an art installation on their roof that was carrier pigeons. Yes. they.did. People could check out a pigeon, take it home, then release it to fly a message back. It was fun & amazing to see that they knew just where to go. The prep, of course, was to teach them their destination. I think I've read about these pigeons helping though not connected to motorcycles. I imagine Donna loved your poem and connection to her.

Such a great story you've woven with your poem and pics together! I liked how you moved from Donna's motorcycle interest to cyclists in WW1, to "My poor seat is feather-adorned," and then the fascinating homing pigeons. Great all around, thanks Tabatha!

Wow! This topic and the photos and the poem are so cool! I love how you "homed in" on Donna's passion and made sure to find some motorcycle history. Semper gutsy! Sounds like Donna to me.

Wow! I didn't know about the role of motorcycles or pigeons in World War I. You crafted the perfect poem for Donna, too.

This is fabulous, Tabatha! I loved reading about how you wove all the strands together to create this rich, delightful poem. Wow! I'm pretty much bowled over, and I imagine Donna was as well. "Semper gutsy"--love it!!

Tabatha, I love the way you began with a topic near and dear to Donna's heart, then delved into the fascinating history of dispatch riders. Thank you for sharing!

Your poem is delightful. Is there a picture book about these pigeons used in the war? If not, you should write one. Your rhymes are wonderful. Such a great gift for Donna.

Your poem sure took you on a wild ride, Tabatha! It's perfect for Donna. :D And then you made me all verklempt thinking about the poem I wrote for Cher Ami. We should start a WWI pigeon poetry club!

Tabatha, I loved your poem and I loved reading about the research process. Donna is very lucky. We are all very lucky. I'm impressed and inspired by how you managed to incorporate so much information in verse.

This topic and the photos and the poem are so cool! This is fabulus. HealthTip4u