My son just finished applying to study abroad in Germany next semester, so we are thinking German around here. (He played for the German team last week in UMD's foreign language department soccer tournament. They had their own World Cup -- how cute is that?)

Today, we have a German poem about friendship.

"Ginkgo biloba" is a poem written by Johann Wolfgang von Goethe for his friend Marianne von Willemer. He showed her the Ginkgo tree in the garden of Heidelberg Castle from which he took the two leaves pasted onto the poem. [Wikipedia] 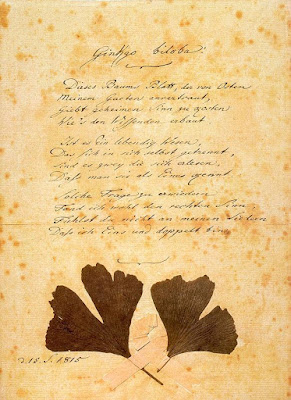 In my garden’s care and favour
From the East this tree’s leaf shows
Secret sense for us to savour
And uplifts the one who knows.

Is it but one being single
Which as same itself divides?
Are there two which choose to mingle
So that each as one now hides?

As the answer to such question
I have found a sense that’s true:
Is it not my songs’ suggestion
That I’m one and also two?

Translated by John Whaley
Read the original German or other translations here.

Are you interested in sending a poem and small gift to a Poetry friend? We've got a one-time swap coming up. 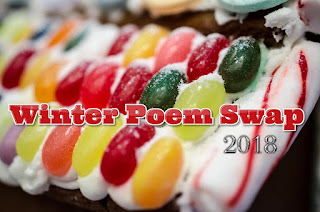 The deadline for signing up is November 2. Email me at tabatha(at)tabathayeatts(dot)com.

Studying abroad sounds so exciting! Good luck to your son, and thanks for sharing "Gingko biloba." This is the first time I've read it. Have a great weekend!

We lived in Germany for a few years, and enjoyed every bit of it, so I'm happy for your son. Thanks for hosting, and for sharing a translated poem. I love comparing to the original language, even if I don't speak it well.

(by the way, my link will be live in the morning. Had to stop by early, so thank you for being up and running!)

Tabatha, that was neat reading different translations of the poem. Thanks for sharing that. I'm not familiar with this famous poet. And, I've wondered about him. The Germans in my family that are known for their engineering brains. But, perhaps it took a bit of Irish from the other side to spark the creative in me....who can't add 2 and 2 together to get the right answer! Thank you for hosting Poetry Friday. I'm off to sign up for the winter poem swap. I so enjoy the swaps!

Thanks for hosting! This past summer I was in the same place Goethe had been in Braunschweig, Germany...and Gingkoes are my favorite tree of all!

Oh, I love that Goethe poem. Thank you for sharing! And also for hosting...

Quite a profound observation from Goethe! And very cool being able to read the different translations! Thanks for hosting, and have a great weekend! (My post doesn't go live til just after midnight)

Oh study abroad is so exciting. My daughter studied in England last semester and it was a wonderful experience for her. She also enjoyed her visit to Germany and Austria. That is a lovely poem on friendship. Thanks for hosting today!

Gorgeous poem Tabatha, I like this translation. I'm fond of the grand gingko tree too, and have drawn at least one or two. How exciting for your son to study and live in Germany! Thanks for hosting the Roundup!

It seems like you were just posting about your son applying to college--and he's already studying abroad! Sounds like he's well prepared in the German and soccer departments. Love the poem, and the print with the beautiful leaves. Thanks for hosting.

The gingko is a lovely tree. We don't have many around here. How sweet of Goethe to include the leaves with this poem for his friend.

I hope your son takes advantage of every opportunity to travel that he's offered. We are separate from the rest of the world in so many ways.

Goethe and Gingkos! Lovely, Tabatha - Thanks. I'm smitten that the actual leaves were tucked in with the poem. And very best wishes to your son!

Thanks for hosting and sharing Goethe. We are all so solitary in the end, and yet so connected...

Once in a while I find a leaf in a book of mine, so I adore that poem's copy with the actual leaves. What a lovely love poem. And I love that foreshadowing in the first verse: "And uplifts the one who knows." How wonderful for your son to study elsewhere.Best of wishes, and thank you for hosting!

What a lovely poem. Exciting news about studying abroad. Good luck to your son, and thanks for hosting this week!

p.s. My link might be up twice? If so, can you remove one? Sorry about that...

Your kids take part in such wonderful opportunities! Makes for never a dull moment, eh Tabatha? I would expect no less from children who epitomize the opposite of indifference. :) Thanks for hosting today, T!

Rather impressed that a poem can be translated into rhyme! (Because of course, I'm assuming it was rhymed to start with.) And such an exciting time for you and your son. I wish him the best with his application. Also - will be landing in your inbox for the poetry swap. So glad I didn't miss that invitation in my extended silence! Thank-you for hosting. :)

I love this German friendship poem! The leaves of the Ginkgo are so wonderful. I am so ready for the fall season! Thank you for hosting, Tabatha!

Thank you for this poem and for the swaps you so generously set up! Much luck to your son. Studying abroad is a true life-changer. I lived in Denmark for a year, and I can point to things in my life today that come from this time. Thank you for hosting, Tabatha! xx

Thank you for the poem - I love its message! And good luck to your son. As one who is currently on an exchange I can attest to their worth.

Thanks for hosting and sharing Goethe's poem. It's cool to see the original where he added the gingko leaves. I missed the last poetry swap - I'll be sending you an email soon too :)

The poem has multi dimensional qualities with the application of the leaves and it seems most appropriate that you draw a connection to Germany, given your son's place of study. Thanks for hosting Tabatha.

I love how you are bringing your son's overseas experience into your lives! And I love the poem and art you shared for #OctopusMonth. Hugs and love to you, Tab! xo

I'm a fan of gingko trees, so I love this look at their leaves. Thanks for sharing the poem, and also for hosting!

Thanks for hosting, and good luck to him!

Sehr gut! Deutchland ist wunderschön! I've been living for the last year in Switzerland with my family. We are all trying to learn German with varying degrees of success - not an easy language. Congratulations to your son, Tabatha. Will he be studying at the University in Heidelberg? It is an amazing campus and city. =)

Clicked through to the other translations, too, and I like this one best. I can see why you chose it. Lovely!

How wonderful for your son! That's exciting.

Thanks for hosting, Tabatha!

Oh, I ADORE the Goethe. Thank you for that. Ginkos are one of my favorite, favorite, favorite early Autumn and early Spring trees - the pale yellow in autumn and that vivid green in the Springtime just do my heart good. SO gorgeous.

Congratulations to your son! Fingers crossed for an adventure!
Thank you for hosting.

Thank you for hosting and for the lovely poem!

Good luck to your son for the study abroad. My husband lived in Germany when he was younger and really enjoyed it. And I always enjoy reading friendship poems.

Thank you for hosting! Thank you for sharing the gingko poem. I love ginkgo trees--and there are some tremendous ancient specimens here in Japan. Unfortunately the recent typhoon means the leaves have browned in our area and we'll miss all the glorious golds this year.

I loved sharing Eve Merriam's poem, "Simile: The Willow and the Gingko" with my sixth graders. It led me to learn more about the gingko tree. This poem is new to me. Thanks for sharing. So fun to see the original with the leaves at the bottom.

Tabatha, I will return to your blog later. I have a family emergency now. My uncle who turned 90 fell and is in the hospital. Tomorrow was his party and the family came to my sister's house in Central NY to celebrate. Life is fragile and uncertain.

First of all, thanks for hosting.
One of my daughters spent a semester in Germany. It was an amazing experience--and her German was much-improved.
Good luck to your son!
And thanks for sharing the Goethe poem. I wasn't familiar with that one, but I'm glad to make its acquaintance! Ginko is an amazing (and also sometimes stinky) plant.

Tabatha, thank you for hosting PF and best wishes to your son for his soon-to-be study abroad venture. I enjoyed the poem on friendship and liked seeing the original poem with the leaves. I am on my way back to Long Island looking at all the changing leaves. Thank you also for your email about my family's medical emergency. It is difficult to go through traumatic events and not be close by. I would love to take part in the winter swap but I am worried about having time.