What do dogs do on their day off? Can’t lie around – that’s their job.
~George Carlin

My buddy Laura Shovan sent me charming origami pups containing dog haiku for the Summer Poem Swap. (It should come as no surprise that Laura has hidden talents like the ability to fold adorable pets. Never underestimate a knitter.) 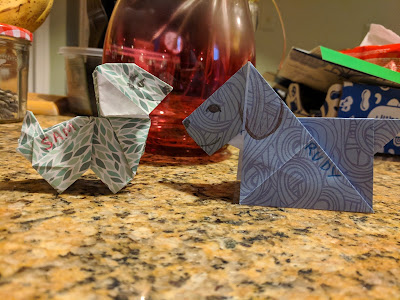 Laura named her origami after her dogs

Inside the origami were (Rudy first, Sam second):

June rain
wipe your paws
when you come in, dog


Laura really nails canine-ness, doesn't she? So this next part is kind of a rabbit trail which circles back around to Laura's swap. I heard about rhapsodomancy recently, which is a scrumptious word for divining the future with poetry.

Rhapsodomancy is an ancient form of divination performed by choosing through some method a specific passage or poem from which to ascertain information.

There were various methods for practicing rhapsodomancy. Sometimes, individuals would write several verses or sentences from a poet on multiple pieces of wood, paper, or similar material, shake them together in an urn, and pick one at random. Sometimes, they cast dice on a table that was covered with verses; the one on which the die landed was said to contain the prediction.

In ancient Rome, the method of sortes involved opening a book and choosing some verse at first sight.


Even though I don't actually believe in telling the future and am not 100% sure I would want to find out even if I did (believe in it), I decided to play with the concept.

Laura gave me an arts magazine along with the poems she sent me, and I decided to open it and point to something and see what I got. What would my little experiment in rhapsodomancy uncover? Well, at first, I got a photograph titled "Tranquility." Okay, sounds good, but that's more photodomancy than rhapso, so I kept going. Got a colored pencil drawing the second go-round ("Portrait B") but the third time I got a stanza!

Prophecy? Words to live by? What do you think?

The Miss Rumphius Effect has the Poetry Friday round-up. Thanks, Tricia!

I think that this post is quite possibly my favorite of all your posts of all time. Oh, my goodness....that rasphodancy is a thing? That's awesome and cool and kooky and spooky all in one. What a very neat idea (I don't believe in it, either...and wouldn't want to even if we both did) to contemplate. And, how fun to play with it in the poem swap. Tabatha, it's always fun visiting with you. Enjoy the pups and the summer.

Love your gifts from Laura and that you have discovered, and shared, about "rhapsodomancy". I enjoy learning about things people did in the past, perhaps we can connect those ideas with our own ideas today and derive some comfort. Your 'strength" foretold in your own investigation feels prophetic to me, and an affirmation, too, Tabatha.

What a fun package you received from Laura. I loved reading about it. I'm always amazed at how creative our fellow swappers are!

I'm not blogging this week, but I'm so glad you enjoyed the haiku and Dragonfly journal, Tabaths. There are some wonderful treasures inside those pages.

Love those haiku doggies, they are Special and have such character too! Sam's haiku is right to the point. Rhapsodomancy–that's a mouthful reminded me of rhapsody in blue right away, kinda fun idea, and I like the stanza by T.R. White. Fun and intriguing post Tabatha, thanks–and thanks for organizing all the swaps too!

Lol! Quivering noses... seems to be a trend...
https://moreart4all.wordpress.com/2018/07/05/poetry-friday-plein-air-poetry-swap/
Love your new word, and the cute haiku doggies!!

I always learn something new and enticing when I visit your blog, Tabatha! Today it's "rasphodancy ", and now I am tempted to try my hand at it. Loved Laura's poetry gifts - those pups look adorable.

Rhapsodomancy??? Hmmmm. Definitely new to me. But fun that you tried it, and I love the poem that came up. I also love the dog poems and origami! So fun and so perfectly captures the spirit of a dog owner/lover!

Those origami pups are just adorable, and yes, Laura nails dog-ness with her poems. I enjoyed following along with your experiment, but am not about to hazard a guess for what it might mean!

Love the paper puppies, the rhapsodic Rhapsodomancy and the wily wisdom. Terrific, Tabatha!

It means you will overcome all obstacles! Like you didn't already know that. :-)