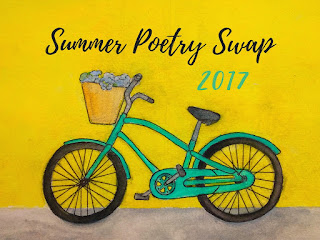 Iphigene and I sent each other poems for the first swap. I think they are sort of a conversation in themselves, even though we wrote them at the same time.

Iphigene explained that her poem for me was inspired by a book she was reading called The Lonely City by Olivia Liang, which explores the idea of loneliness through different artists.

She says, "While the poem may be a bit sad, I thought, since you had a blog that explored art, this would perfectly fit...I hope the poem is able to deliver, more than the idea of the lonely, but the way art connects the lonely with each other, hence in a way building this sort of invisible community." Iphigene also sent me an excellent drawing of hers to go with it: 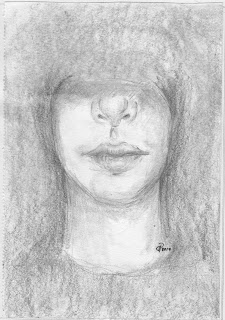 The Lonely
By iphigene
(for tabatha)

They are the lonely:
Bodies with big black
Voids digging into their bellies

There is no fire in them----
Only a chill, an eternal winter
Gnawing at their backs
seeping through their veins
Reminding them
They are the lonely.

Hopper, Warhol
Darger ---artists
Born with loneliness
Clinging to their souls---
Never to be erased
By crowds and art

Only to be eased,
Eased by the swelling
Depths of their voids
Into canvases, photographs
And prints

That among the bodies
In a crowded city, in the midst
Of laughter and camaraderie
Are the lonely: just like
Them, just like me

Souls with loneliness
Clinging like skin
To their bones.

My poem for Iphigene was inspired by a poem by L.L. Barkat. I’ll include it first:

Let's make walls like this,
you and I.
Not the kind that stand between us,
but the textured kind you might
run your fingers over
to find its heart. And a wall like this
would have a heart,
in case you were wondering.
Because we’d be painting our colors into it,
and it would look like sweet meyer lemon, aqua sky,
grass green (the kind you see in spring) —
and, love.

Here’s the poem for Iphigene:

Let's make scars like this,
you and I.
Not the kind that
prove the wound stung,
but ones are smooth pink witnesses
to the healing, to the
sealing of the raw cut. No swollen
red streaks scalding the edges,
a scar like ours would mark recovery
that can withstand a poke or prod,
a sleek track that holds fast,
and signifies stories, survival,
and strength.

Katie at The Logonauts is hosting the Poetry Friday round-up. Thanks, Katie!

Thank you for letting us listen in on this conversation. Iphigene's idea that loneliness can't be erased, only eased, jumped out at me. It connects beautifully with your idea that we can look at scars as evidence of a wound or evidence of healing.

I enjoyed these poems of conversation, Tabatha, and both you and Iphigene speak of certain low parts of life that have antidotes, positive ways of thinking of them. Beautiful to read, and re-read.

These poems speak to the power of words being able to speak "to the healing, to the
sealing of the raw cut". Just beautiful.

Wow ( I really need to find a new expletive....I have used wow in just about every response to this poetry friday). But, WOW! You two did/do have a conversation going about the connectedness humans seek. The poetry swap has been a huge success. I didn't participate....but as an audience member I am simply...wowed.

Favorite lines from iphigene...since I recently visited the Warhol museum in Pittsburgh: Hopper, Warhol
Darger ---artists
Born with loneliness
Clinging to their souls---
Never to be erased
By crowds and art

And from you, Tabatha...."to the healing" and "mark recovery"
If you've ever known someone to suffer from the compulsion to cut...this means a lot. I hope you can get this out to the larger world that needs it so.

Tabatha, you and Imogene hit upon a raw edge-loneliness and healing to seal the wounds. The depths you both take us in these poems are ones that everyone should reflect upon as we find a route to survival beyond loneliness. Thanks for sharing the depths of both of your souls.

I believe in the power of poetry to connect and heal. These are beautiful and powerful statements to this belief. We are all lonely, but if together we tend our scars, we can heal; we can heal each other; we can heal the world.

What a beautiful conversation. I think so many of us are drawn to art and creation because it does fill a gap in our lives, and satisfies a hunger in our souls, in a way nothing else can.

It is quite incredible, how these poems speak to each other. Those together with that Winnicott quote at the top, leave me feeling like I've just experienced a "moment."

All of these poems are wonderful to read. I especially like the ideas explored in "Let's Make Scars". Thank you!

You each offer such hope while facing things head on. I like that very much. I prefer to focus on the good things that come rather than the bad things that were. Giving so much of my brain space to thinking of the positive makes me happier, yet one cannot overlook all the healed pink skin or the moments that loneliness sneaks back in. Great dialogue you've opened with these poems.

Wow! You two are a lesson in synchronicity! I have never heard of Darger, so I'm off to Google!

What a powerful conversation from the easing of loneliness to the healing of wounds. I am thankful this community that connects poets and artists.

Tabatha, I can feel the pain and loneliness right down to the bone. Each of you are in sync with the reality and depth of this topic. Also,thank you for dropping by the ridge and leaving such kind words of sympathy. Poetry does have the power to heal the raw cuts.

There are many layers here in your conversational poems, I think that's what's most appealing to me–and as they are poems they both twist and turn with meaning. I'm familiar with the visual artists here, Hopper speaks to me out of the three, his vision. I always liked the playfulness of Warhol's art, but have a hard time separating his personality from his art. Thanks for all, Tabatha.

I agree that your two poems (and your two readings) seemed to see each other even as they were being written--I was going to say "eerily connected," but I often notice this happening so it's not really eerie; more striking. It is fascinating, the tension between showmanship (some version of which lives in all artists) and isolation from the crowd, which is what make those artists' work compelling to the crowd. Thanks for sharing.

Wow. Do these poems every "talk" to each other! Amazing. I love the way you've reimagined scars.