Last week, I shared a poem by Ariana. This week, I have a chapbook by a poet she met at Vanderbilt. 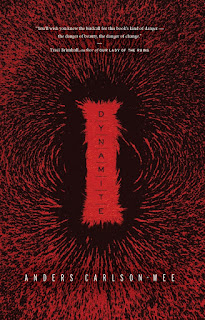 Ariana told me I would like Anders Carlson-Wee's poems, and she was right. Thanks for giving me permission to share these, Anders, and thanks, Ariana, for introducing me to his work!

Check out an interview with Anders Carlson-Wee in Slice. It's not an exaggeration to say that you probably haven't run across someone quite like him before.

Out of all the dumpsters that could have been
empty, all the weather that could have bloomed
over the prairie and ruined me, all the cars
that could have sped by without hesitating and left me
on the fog-line nameless forever. The trains
that could have taken my legs. The hobos
that could have pulled a switchblade and opened me
like a flood enfolding the red North Dakota clay.
Out of all the hazards we pass through
in amazement, all the stories we tell of luck
and good fortune and prayer and survival, it is always
our own lungs that dry up and darken,
our own miles that straighten, our own hunger
that wanes. The Lord gives us mountains
and we fail to mine out that grandness.
The Lord gives us trains and we waste those distances
transporting coal. Some say we are broken,
some say the Good Lord has forsaken our dreams,
but I say it is our own throat that grows
the cancer, our own asthma that blackens our breath
to a wheeze. And the truth is, the mile-long train
will always crawl past. The socket-fixed gaze
of the owl’s skull will always turn perfectly
backwards. We will always be bodies among ghosts.
And what is important to them is not how we ride
on the westbound freighter, not how we shiver,
not how we crawl crooked and thin
and climb yet again into the trembling eye-hole.
It is not about suffering. It is not about fear.
We must peer out from inside the owl’s eye.
Watch the coal dust cook in the wind eddies.
Watch it linger. Watch it spiral thinly as it bruises
the blue-faded mind of the buffalo sky.
We must be the pupil that swells in the coming darkness.
The cargo worth carrying across the distances.

To the Fingerless Man in Banff
by Anders Carlson-Wee

There was little you couldn't do.
With the purple stump of your thumb
you pinned a pencil against
the knuckle-lumps, forming enough grip
to sketch her portrait from memory,
or from the photo you kept hid
in your hatband. You worked the ranches
like before. Rode horses. Knotted
ropes. Shuffled when you dealt.
You let me ball old newsprint
for the fire, but you did everything else.
Gutted the fish. Stuffed the belly
with berries and butter and smoked it
by rotating a willow stick.
And when you folded your hands
to whisper the words over the meal,
nothing folded, but what kind of world
would this be if that mattered?
Your cheeks filled and flickered
as you chewed. The embers bedded down
and the clouds born out of them
twisted through the cottonwoods.
You never told me her name.
That could jinx it,
you said.
If I find her again it ain't gonna be
as a detective.
You could even roll
your own cigarettes, but you couldn't
roll the striker on a Bic.
I flicked it alive for you. Your palms
pulled my hand toward your lips.

Reflections on the Teche has the Poetry Friday round-up. Thanks, Margaret!

Sometimes when I read a poem, I start to skim to find the good parts, the parts that start my heart. These I could not skim. I had to swim.
And that is what I did.
I may need a copy of this collection. Thanks for sharing.

Oh to be the cargo worth carrying across the distances... what a worthy goal. Thanks for sharing these rich poems, Tabatha, who sees with an owl eye. xo

Well, you're quite right, Tabatha. I certainly haven't come across someone like Anders before. What a fascinating interview! I could never live that way myself, but I have such admiration for folks who put their art above everything else. Folks who live their lives unburdened by the daily hoo-ha, just moment to moment, risk to reward and back again. This is the line I'm taking with me today: "We must be the pupil that swells in the coming darkness."

Wow, intense and visceral and powerful. No, haven't come across anyone else like him before. Thanks for the intro to his work!

Jama is right - intense and visceral poems. I think I need to buy his work.

Wow, Tabatha. These are outstanding. They remind me of the Beat poets and Bukowski.

You give us something good every week, Tabatha. These are wonderful. Although late to reading it, I just finished Unbroken this week, and the poems by Anders Carlson-Wee feel like a footnote for that story. Thank you!

Thanks so much for sharing my work, Tabatha! It's a great honor and joy to read these energized, thoughtful, and generous comments from readers!

I love what Donna said about swimming in these poems. So powerful and painful. But the kind I am drawn to again and again. Amazing!

Oh my! As I was reading them, the thought came to me that the only thing better would be to hear Anders read them himself. What a life! What a talent!

Watch it spiral thinly as it bruises
the blue-faded mind of the buffalo sky.

Wow. Thank you for this introduction, Tabatha, and thank you, Anders, for sharing your work here. I read the interview and the other poems there, too - am passing along to a couple of family members who will appreciate. Powers of observation so very finely honed, it hurts to read... but too compelling not to.

Thanks Robyn Hood for the generous comments! That means a great deal to me. I hope your family members find some energy in them as well. Thanks again! -Anders