Australian Gavin Aung Than is the artist behind "Zen Pencils," where he shares "cartoon quotes from inspirational folks." Gavin has kindly given me permission to share his work here. I wish I could share two without it becoming unwieldy, but instead I'll send you to his blog to see C.S. Lewis' To Love At All.

My son, the teen history buff, likes making connections between things he knows. He was pleased to discover that the Ozymandias of Percy Bysshe Shelley's poem was a real person, Egyptian pharaoh Ramesses II. My son had already heard of this long-reigning pharoah who spearheaded what was probably the largest chariot battle ever fought -- The Battle of Kadesh.

On to the poem! 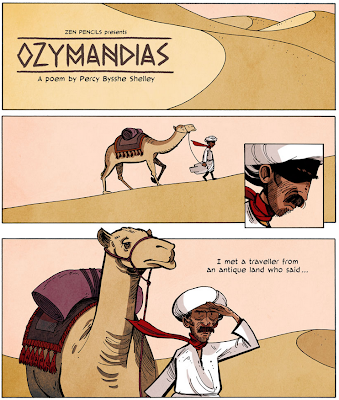 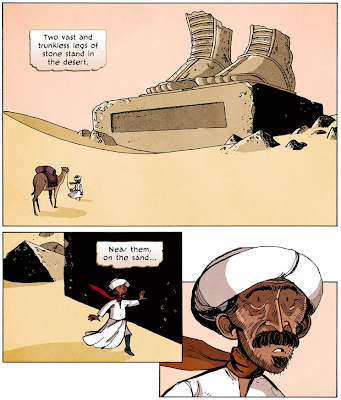 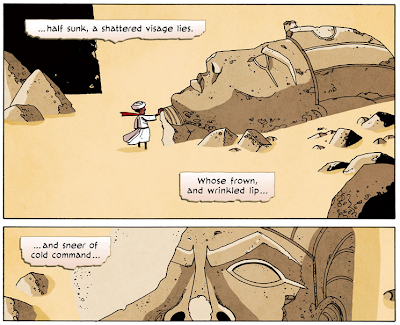 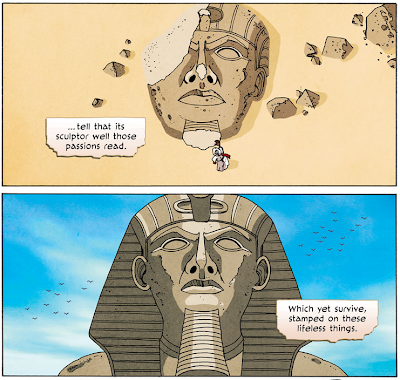 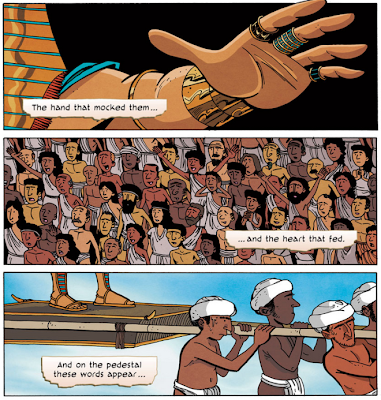 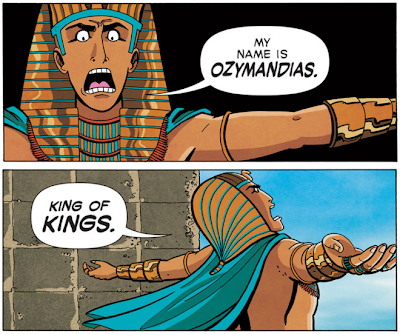 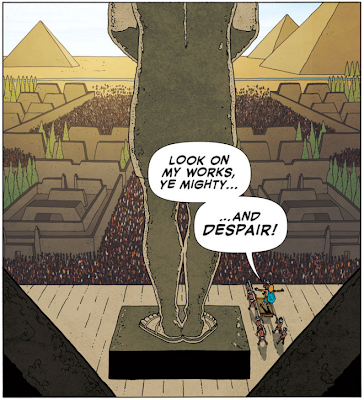 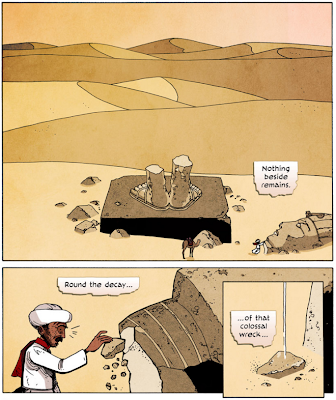 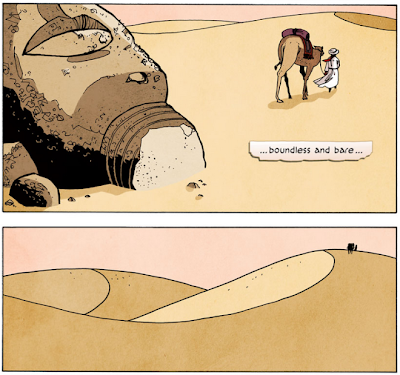 I met a traveller from an antique land,
Who said— “two vast and trunkless legs of stone
Stand in the desert…near them, on the sand,
Half sunk a shattered visage lies, whose frown,
And wrinkled lips, and sneer of cold command,
Tell that its sculptor well those passions read
Which yet survive, stamped on these lifeless things,
The hand that mocked them, and the heart that fed;
And on the pedestal, these words appear:
My name is Ozymandias, King of Kings,
Look on my Works ye Mighty, and despair!
Nothing beside remains. Round the decay
Of that colossal Wreck, boundless and bare
The lone and level sands stretch far away.

Tara at A Teaching Life is our Poetry Friday round-up host today.

Tabatha -- wow what a find. I remember reading this poem by a teen and being struck by its irony. So cool to see how the illustrator visualized each phrase.

Wow, Tabatha - if this doesn't make poetry come alive for contemporary readers, I don't know what would! Thanks for sharing Gavin Aung Than's fine work; I look forward to checking out more at his site.

Thanks for the heads up about Gavin's site, T! It was nice to read Shelley's poem in a new way :). Also enjoyed Gavin's interpretation of Lewis's words.

Wow. I really like what he did with the C.S. Lewis too! Thank you for turning me on to Zen Pencils, Tabatha.

Wowie! What a great bridge into poetry for visual folks! This poem brings back memories of my 11th grade English teacher who used this poem to teach us about meter. Iambic pentameter, right?

I have a student studying cartooning & he will love this, Tabatha. I've been exploring more visual arts for the written word & this fits in beautifully. Thanks for the link to more of Gavin's work, too!

I LOVE Zen Pencils! When his email updates show up in my inbox, I skip straight to them. His illustrations of quotes and poems really bring them to new life. It's exciting to see his career taking off!

Wow. What a concept and creation! I loved what he did with the C.S. Lewis quote, too.

This is so cool! I can't wait to share it with my son, who also loves history.

I'm not much of a history buff and of course the subject of this poem is new to me, just the say I love that this poem is wonderful and informative. I have learned something new today.

Interesting that you've featured this poem this week. Did you hear the news about King Tut's beard? If not, here's a link http://news.discovery.com/history/archaeology/king-tuts-beard-broken-off-wrongly-glued-back-on-15012.htm

Whoa - thank you for the introduction to Gavin Aung and Shelley's poem, Tabatha. =)

Wow. Very cool approach and presentation of the poem. I remember first reading this poem in school (they used to teach it in 6th grade) and being wowed by it. Its power never fades. Off to check out the C.S. Lewis one.

I love the poem and the way the artist brought it to poignant life. Zen Pencils is pretty amazing. I love how the internet gives us so many forms to interpret one piece of writing. My son studied Poe, and was able to read the poems, and then watch short you tubes made of them. That wasn't possible when I was a kid.

I need to check out Zen Pencils. This was fun to see how he interpreted Shelley's poem.