I want you, as a reader, to experience what I experience, to let that other world, that imaginary world that I have created, tell you things about the real world.
~Terry Brooks 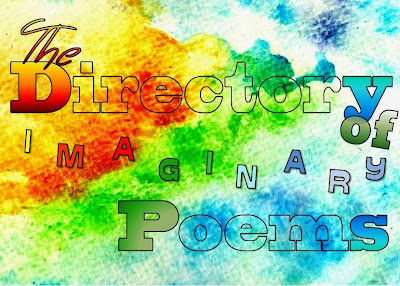 It's only January, but lately I've been asked to sign my kids up for summer camp and to plan out a school program for National Poetry Month in April. People are thinking ahead. If you can't beat 'em, join 'em, I say, so I came up with a scenario of my own for NPM at The Opposite of Indifference. So...anybody want to go somewhere imaginary?

A while back, I wrote some poems that I filed under "Directory of Imaginary Poems." They were inspired by The Dictionary of Imaginary Places by Gianni Guadalupi and Alberto Manguel. You are invited to add poems to my "Directory," either by writing poems for it or nominating poems that someone else wrote (for instance, Jabberwocky by Lewis Carroll). I will collect them and post them throughout April.

There's a list of imaginary places here to help you get started. Pretty much any place from your favorite book or movie would work, with these caveats:

I'm not worried about getting multiple poems about the same imaginary land -- the more, the merrier! I'm sure no two people would have the same thing to say about Narnia, Gallifrey (Doctor Who), or Florin (The Princess Bride), for instance.

Some examples (my own and others):

* Alice in Wonderland
* The Sugar-Plum Tree
* Atlantis
* On the Island of the Fay
* O.O.U.
* The Sea of Frozen Words

Plus a poem for today:

Waiting On Hogwarts
by Tabatha Yeatts

You imagine
the slither of the envelope
slid suddenly under the door
might sound like two clouds
brushing against one another,
or a knife slicing
through a steamy, perfect
Christmas pudding.

You wonder
if the letter will be thin
as firecracker smoke,
or crackly and substantial
as a parchment map.

You see your name
written in letters
that a calligrapher would admire,
the ink barely dry
before you are spirited away.

You hope you won't cry,
but in the triumph of being chosen–
of being recognized
for who you really are–
who could blame you
for a tear or two?

If you come up with a poem, send it to me at tabatha(at)tabathayeatts(dot)com!

The logo above was designed by my daughter (I painted the background). Thank you, Elena!

You can find the Poetry Friday round-up at A Teaching Life.

I'll go digging. I'd love to participate, Tabatha! I'll be back.

Your poem inspires those deep thoughts about what it would feel like to be Harry. I'm always up for a challenge and today I have a no snow day to play. See my post: http://reflectionsontheteche.wordpress.com/2014/01/24/snow-day/

Like your Directory of Imaginary Poems idea. Will go digging. :)

Oh, man. You already know what you're doing for NPM. Daunting.

Well, adore the idea, & will certainly look, & try to write, Tabatha! Your idea may bring out some interesting things! I love the poem, "thin
as firecracker smoke"-Harry Potter, & others do inspire me! Thanks!

I love the idea of writing about imaginary places. Your poem is so wonderful. I have heard of many kids who are a little disappointed not to get their letters on their 11th birthdays.

Hi, Tabatha. Your description of that letter is spot on and so tactile.

I have a poem about Peter Rabbit, which you can find here: http://www.switched-ongutenberg.org/current/shovan.htm. I'll see what else I can conjure up. Great project!

What a wonderful idea!

You clever thing. Wonderful images in the poem -- the feel of the paper especially. I've bookmarked this post so I can (fingers crossed) come up with something before April!

Terrific idea, Tabatha, and I LOVE the logo you and your daughter came up with! The first poem that comes to my mind is "Where the Sidewalk Ends" by Shel Silverstein. Would that be suitable?

All I can say about your Hogwarts poem is: Splendiferous Totalis!

What a great idea for NPM. I will be working on one for you. Ahh, to be at Hogwarts.

I want to get this envelope! Love the project and hope to participate. xo