What you are doing does not matter so much as what you are learning from doing it.
~ written on an ancient Egyptian temple

My son recently got the new book by his favorite author, Rick Riordan. Riordan's Percy Jackson series was about ancient Greek deities; this one features ancient Egyptian gods and goddesses.

This week, we're in ancient Egypt:

Baboon with a wedjet eye, circa 688–525 b.c.e.
The baboon "was known as a deity called the 'Great White One' (that is, the moon), but soon this god was conflated with Thoth, the better known ibis-headed god of writing and recording." Thoth was in charge of making the calendar, which was based on the cycles of the moon, so the two gods went together well.
The Metropolitan Museum of Art 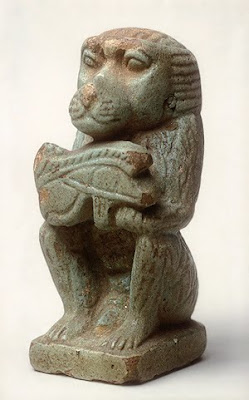 Bast of the Rising Sun
by Lynnette Shelley 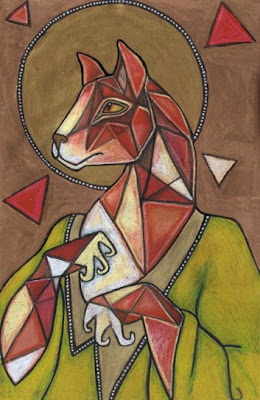 Statuette of the god Anubis as embalmer, circa 332–30 b.c.e.
"This wooden figure represents the god Anubis with a canid head on a human body, wearing the feathered costume of Egyptian deities. In this pose­hands raised, palms downward­, the god performed purification and transfiguration rites over a mummy. During the actual mummification process, a priest wearing a canid mask played the role of Anubis."
The Metropolitan Museum of Art, NYC 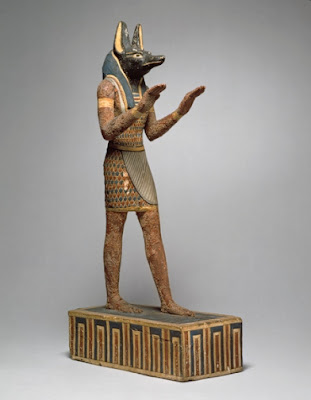 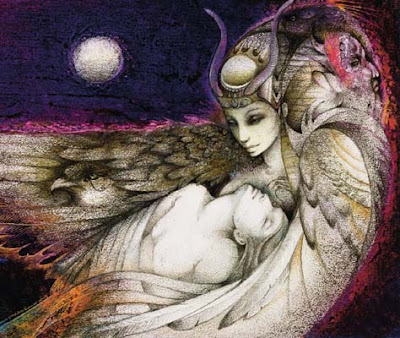 King Sahure and a nome god, circa 2458–2446 b.c.e.
"Seated on a throne, the king is accompanied by a smaller male figure personifying the local god of the Coptite nome, the fifth nome (province) of Upper Egypt. This deity offers the king an ankh (hieroglyph meaning "life") with his left hand."
The Metropolitan Museum of Art 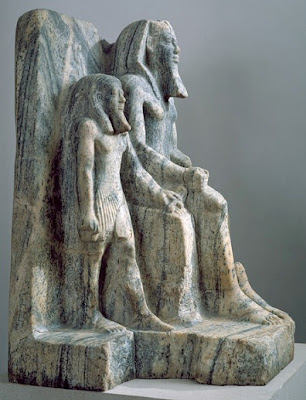 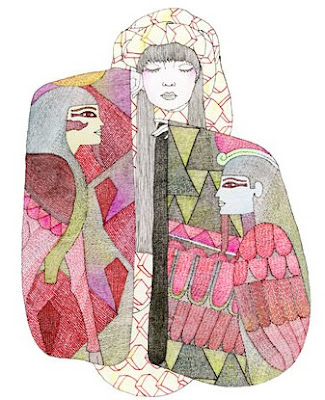 I don't know what deity/king/character is represented here (it looks like maybe Horus is on his headgear), but I liked this harp from The British Museum -- it reminds me of a ship with a carving on the bow. 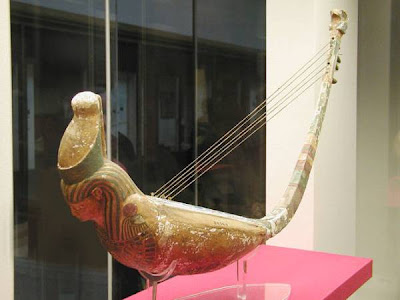 Links:
~ Egyptomania from the Seattle Art Museum
~ The University of Chicago's Oriental Institute has an ancient Egyptian coffin for a lizard.
~ Make Your Own Canopic Jars
~ Make a Cartouche
~ A bunch of interesting ideas from the Art Gallery of Nova Scotia
~ I liked this work from a collection of art devoted to the TV show, Lost.
~ A list of Egyptian gods and goddesses from the British Museum
~ NOVA's Explore the Pyramids
~ Ancient Egypt Bingo

So Good post and i will follow you Blog and i hope to follow my blog Ancient Egyptian Gods and Goddess and see more about Hathor Egyptian Goddess of love thanks a gain admin ,,,