Language is the archives of history...Language is fossil poetry.
~Ralph Waldo Emerson 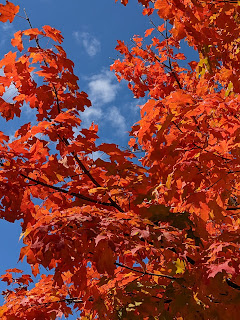 For Poetry Friday, poems from Katie Haegele's Obsolete, a series of poems inspired by her favorite obsolete words:

I think it's weird the way we all have favorite animals.
Not pets, but wild things we like the way we like each
other, for the shape of a snout or a rippling limb, a

sweetness we think we sense in the ones that eat grass
instead of each other. I think it's because we wish we
could borrow what they are and be that too, have their

ultrasonic hearing or empty-eyed patience. Well, maybe we can.

Did you know that Buster Keaton made his own hat(s)?
The singular hat was iconic of course but he actually
had thousands of them. He invented his hat when he

wanted a porkpie one but those were made of straw and
he knew they'd be too fragile to stand up to his stunts. So
he took a fedora and shortened it. (But how? The article

didn't say how.) Then he stiffened it flat with sugar water,
which is how my mother froze her crocheted snowflakes.
The article I read called it a recipe. A recipe for hats.

Thank you, Katie, for giving me permission to share your poems! (Check out her poignant, poetic post about Obsolete.)

Wee Words for Wee Ones has the Poetry Friday round-up. Thanks, Bridget, and happy birthday!

I'm loving this post--not just for the poems but for the poets and the wonderful rabbit hole you introduced me to. Wow!

Oooh, Tabatha, you find the most interesting poets (and links!) to highlight. Haegele's use of an obsolete word to spring board into a poem is brilliant! As are you. Happy Friday! :)

Empty eyed patience and a recipe for hats. Only at Tabatha's blog. Thank you! xo

Very cool. I hope you also know about THE LOST WORDS
https://www.thelostwords.org/ by Robert McFarlane--words that are leaking from children's vocabulary as they detach from nature. The book comes with an album of songs also; I love this one. https://open.spotify.com/track/1c5Pmoh8KWedGYlu4wipPN?si=364126096ae04c59

Now I'm thinking about how to stiffen hat with sugar water. So much to think about here that I've never thought about which is what poetry does.

I learned something new today! I especially love the poem about Buster Keaton and his hat recipe. Two great poems! Thank you for sharing them!

Everyone today, including your two poems, is inspiring new writing. I save words from various sites. These give new ideas, Tabatha. Thanks!

New words to learn from a new-to-me poet !! How fun. Esp. love the hats poem :). Thanks for a delightful post.

I love learning new words! And, the history of the hats is fascinating! Thank you! I have a book of obscure words that I think I'll be pursuing in the near future! Thanks for the inspiration! Carol from The Apples in My Orchard.

Tabatha, you just had me thinking and then, following Susie Dent on Twitter. Your post is awesome. I just love words!

I like the idea of an "Emotional Dictionary." "Launchant" really fits Buster Keaton–Katie Haegele has a nice matter-of-fact way with her words/poems, thanks Tabatha!

These poems are amazing. Never would have thought to be inspired by obsolete words. Now I have to go make lists of them😁

The excavation of old words provides a stimulus for new ideas and the chance for those very words to be heard once more. You have performed excellent work here, Tabatha. The two poems you shared are most appealing to the eye, the ear, the heart.

Like Heidi's, my brain went straight to LOST WORDS (I was staring at it when I finished reading LOLO'S LIGHT...all my words were lost). And also, weirdly, just before I read this post, I was thinking about how much I love rhinos...and WHY.

I am ALWAYS surprised when I visit your blog. It's like one of those surprise treasure boxes where you don't know what you'll find. Like Mary Lee, I thought of LOST WORDS, which is such a gorgeous collection. Thanks for always making me think...

I did not know these words! What a cool idea, to compose poems from words that have seemingly outlived their usefulness — although Haegele clearly proves that these words still have life.