In June, as many as a dozen species may burst their buds on a single day. No man can heed all of these anniversaries; no man can ignore all of them.
~Aldo Leopold

Continuing with my Thursday Belarus theme! Kupala Night is a Slavic tradition for celebrating the shortest night of the year.

On Kupala day, young people jump over the flames of bonfires in a ritual test of bravery and faith. The failure of a couple in love to complete the jump, while holding hands, is a sign of their destined separation.

Girls may float wreaths of flowers (often lit with candles) on rivers, and attempt to gain foresight into their romantic relationship fortune from the flow patterns of the flowers on the river. Men may attempt to capture the wreaths, in the hope of capturing the interest of the woman who floated it.

There is an ancient Kupala belief that the eve of Ivan Kupala is the only time of the year when ferns bloom. Prosperity, luck, discernment, and power befall whom ever finds a fern flower. Therefore, on that night, village folk roam through the forests in search of magical herbs, and especially, the elusive fern flower...

In Gogol's story The Eve of Ivan Kupala, a young man finds the fantastical fern-flower, but is cursed by it. Gogol's tale may have been the stimulus for Modest Mussorgsky to compose his tone poem Night on Bald Mountain, adapted by Yuri Ilyenko into a film of the same name. 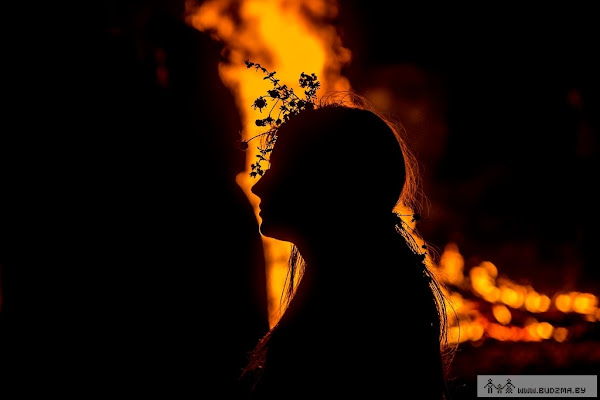 Really interesting info, Tabatha. The photo is beautiful...but makes me wonder if individuals had to jump over a bonfire that large! :-)

I love that quote. We don't have to celebrate every single thing that comes along, but we do have to, HAVE to, find reasons to celebrate.

So many interesting avenues packed into this post Tabatha. Love the image of young women setting their wreaths into the water, and the mystery in the image of the flowers coming out of the women's head, surrounded in flames, thanks!