Fame is a vapor, popularity is an accident, riches take wings, those who cheer today may curse tomorrow and only one thing endures - character.
~Harry Truman

It might be fun for fiction writers and readers to have a "Character Day" where you dress up as your favorite character (does such a thing already exist?), but for Wellness Wednesday, we're talking about something a little different. I received a press release that explains:

There are 7.5 billion people on this planet, and each one of us has a unique character, determined and developed by genetics, our environment, and ultimately, ourselves. The fourth annual Character Day scheduled for Wednesday, September 13, 2017, presented by Emmy-nominated Film Studio Let It Ripple, will explore meaning, purpose and the science of character through a LiveCast Q&A with prominent global thought leaders like the Dali Lama, Krista Tippet, Al Gore, Angela Duckworth and more.

Character Day focuses on the idea that if you concentrate on certain parts of who you are, you can develop your character and ultimately lead a more meaningful, successful and happy life.

Spearheaded by Tiffany Shlain, Emmy-nominated filmmaker, thought leader and founder of The Webby Awards, Character Day highlights recent breakthroughs in the social science and neuroscience behind character development, and provides the tools (films, discussion kits, online resources), for free, for millions of people to engage and develop the character strengths needed to thrive in today’s world. ..You can sign up at CharacterDay.org.


Character Day Trailer from The Moxie Institute on Vimeo. 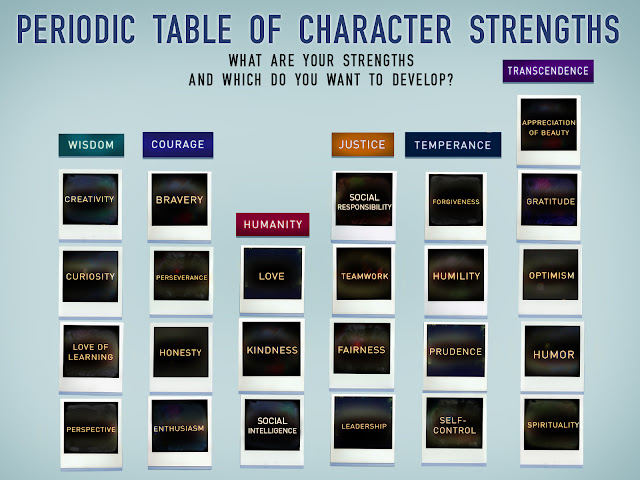 Whatever you are physically...male or female, strong or weak, ill or healthy--all those things matter less than what your heart contains. If you have the soul of a warrior, you are a warrior. All those other things, they are the glass that contains the lamp, but you are the light inside.
~Cassandra Clare

A rather mysterious quote:
You can tell a lot about a fellow's character by his way of eating jellybeans.
~Ronald Reagan

Great idea to think about your own character. I liked the periodic table. It gave me a lot to feed an internal discussion about my strengths and weaknesses. Funny thing, it was easier to come up with a list of my weaknesses than my strengths!

I know you have a lot of curiosity, love of learning, humor, kindness, honesty, love, creativity, fairness, appreciation of beauty, social responsibility, bravery, self-control...so many strengths!