“What is a garden if not a miniaturization and celebration of the place we are in, the universe?”
~ Charles Jencks

Architectural designer Charles Jencks and his late wife Maggie Keswick created an amazing garden on the grounds of their home in Scotland. It's known as The Garden of Cosmic Speculation. 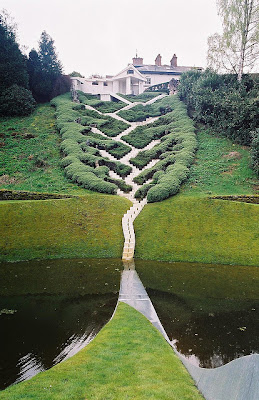 Photo of Universe Cascade by Paulus Maximus
Jencks is in the middle of creating Northumberlandia, a project in England to turn soil and clay leftover from a coal mine into the world's largest human form sculpted into the landscape:

An artist's rendering of Northumberlandia

Northumberlandia is scheduled to be open to the public in the summer of 2013.

These are absolutely fabulous ... so completely different but with the same undercurrent of movement and peace and more.