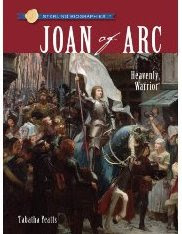 Who was Joan of Arc? Why are people still so inspired by her, nearly six hundred years after she was born?

Learn all about Joan of Arc's childhood in war-torn France; ride with the young warrior into battle after battle and see how she helped a king win his rightful crown; and find out about her terror-filled final days and how, finally, her reputation was gloriously, posthumously restored.

In Joan of Arc: Heavenly Warrior, Tabatha tells the story of Joan of Arc as the people of her day viewed her: warrior, leader, holy figure, witch.

"Appealing...this book is recommended for both younger and older readers."
~ Booklist

Updated to add: There's also this October 2011 post about a Joan of Arc opera.

You can order Tabatha's biography of Joan of Arc from Books a Million, Powell's, and Amazon, among others.